The Goliath has now been a permanent fixture in my poker diary for the past 3 years, there is just simply too much value to miss out on whether it be the £118k first prize for £125 seat or the 50 cash tables running at any one time. Also the side events attract some huge prize pools because of the number of people who attend the Goliath’s 10day festival.

I decided to fire my first bullet at the Goliath on weds this year as it meant I could rebuy that day if I wasn’t to build a day2 chip stack. Also if I went out after the rebuy period then I could still buy in for the last day1 which was on Friday.

As predicted there where quite a few people doing the same thing and trying to build a day2 worthy stack, I didn’t really get above starting stack all day, I just wasn’t getting hands and others were taking my spots away. We got it in after the rebuy period in level 9 just before the dinner break with KK vs AQ and as you would expect the Ace hit on the flop to send me to the rail/cashdesk to buy into the last day1 on Friday.

I then had a few drinks and played the tag team with BB member Lisa Greer, that didn’t go very well mainly down to my drinking but we did get a bit unlucky too. We then headed back to the house we had rented for the duration to play some small cards and have a few more drinks.

Thursday I awoke quite late in the day, got something to eat, played a few more small cards and then headed to the casino to play Thursday’s evening event which was Jokers wild. I quickly realised that on a hangover the thumping music and party atmosphere wasn’t ideal. However on level 4 we have joker on our table who hasn’t played a hand on our table yet. We look down at joker7, I call the joker makes it 1k to call from a 11k stack, we call, the board comes A52 rain, I check the joker makes it 2k, we call, the turn comes a 2, we check the joker makes it 4k and we call. The river comes a 5 giving me a full house but it wasn’t ideal. We check and the joker moves all in…. I couldn’t put him on 22, 55, A5,or A2 because of his raise pre and continue on the flop, I thought that the only hand that could be beating my full house was AA but that was very unlikely too. I thought for quite a while, during this time the joker announced to the table that his bounty envelope was a £560 GUKPT seat. This seat eventually made up mine to call. He flipped over A5 for a higher full house which sent me to the rail and shocked the table that I had lost with a joker which most hadn’t seen happen before.

Friday’s Goliath plays out pretty much like a freezeout because of the massive alternates list. I decided to get there late and skip the early silly play with people looking to get it in within the first 3hands. When I arrived I was on a Grosvenor Pro’s table and everything seemed to be fairly standard play which was good. Three levels had gone by without me really playing a hand as the cards really weren’t with me. At the end of the level the TD came over and told us that we would make up the feature table which wasn’t great news for me at all. My friend commentates on the stream and I thought he would tear my game apart as I probably would do to him haha. We come back from the break I felt fairly comfortable and we started to pick up a few hands. It wasn’t too long before I became chip leader on our table, my friends and family where feeding me some information which was of great help. We did get into one big pot where we lost quite a few chips but at the end of the session we were off the feature table with about 6k extra chips which was good.

We gradually increased our stack throughout the day, we see many people bust and many new faces come to our table. 2 hands before our table broke I lost a big pot for 320k which would’ve almost certainly seen me through to day2. However losing this pot left us extremely short (2bigs), we managed to win the next hand which gave me 5bigs and then our table broke. I moved tables for the last level of the day and managed to win the first two hands which was very very welcome. Then I get dealt 1010 on the BB, the button raises, SB jams his small stack and then I jam only for a guy who had definitely drunk the bar dry on the button to call and flip over AA…Noooooooooo. He was having what can only be described as a party the whole way through the hand whilst I was packing my things up….then a miracle 10 hits the river and we treble, up the drunk guy walks off and we now definitely have a day 2 stack 🙂 We bag 243k at the end of the day which was surely enough to see me into the money.

On Saturday we arrive at the casino nice and early, grab our seat, the table was fairly even in terms of chips and we only have one short stack. The first hour passes where we didn’t see a hand, then about 20 out from the money I see JJ, I raise, a short stack jams and then a stack we just about cover also jams. We took our time and call……the short stack flips over KK and more importantly the stack similar to ours flips over 88…how could this go wrong? A nothing flop comes out and the blasted 8 comes on the turn and we don’t improve! We then look down at 6bigs, luckily they announce that it’s now hand for hand on the bubble and I was on the button so we know if we don’t play a hand then i’ll definitely make the money. True to form the bubble busts and we can now get our 6bigs in knowing we have played for two days and made some cash at least. I double the very next hand with AK, then again the hand after with AA, before long we were back up to 30bigs and were moving tables. The bust outs were coming faster than I’ve ever seen before which was very good for us as we continued to ladder. With about 300 still left in we found ourselves short stacked which I nursed throughout the remaining levels until dinner break. The blinds were then so huge that I needed some help and I doubled a few times but was still very short. Our final hand was QJo on the big which had been opened by the big stack at our table, I jammed and he snap called me off with 77, the board didn’t improve my hand and we exited the Goliath in 64th out of 9,300 for £1,340.00. Thanks again to all those that railed me throughout day2 (I’m sure at one point I had more people railing me than David Haye!!) it was very much appreciated. 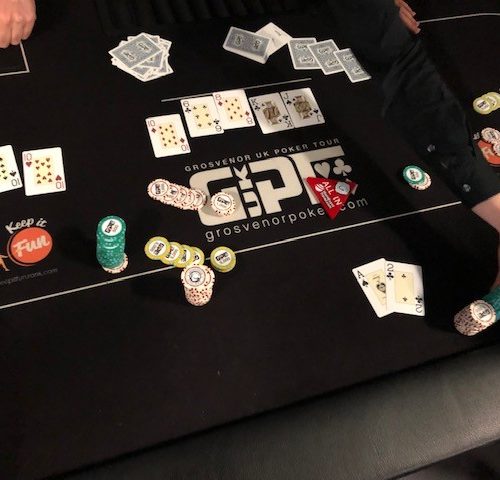 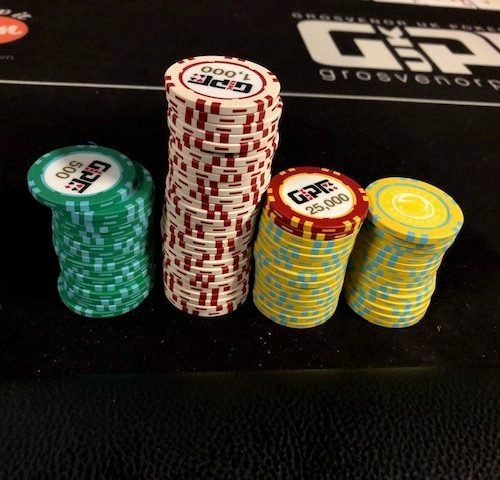 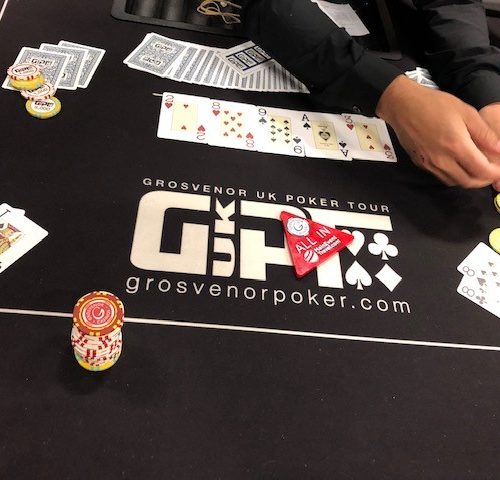